The church’s path to truth and reconciliation began inauspiciously. Construction of Memorial Church began in 1860 on the eve of the Civil War at the corner of Bolton Street and what is now Lafayette Avenue. It had been chartered as a “memorial mission” by parishioners at Emmanuel Church to honor the memory of its first rector. 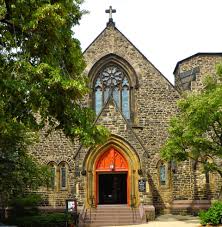 There would be six rectors at the new mission church by 1878, when Dr. William Meade Dame arrived, a Confederate Army veteran. Until his death in 1923, Dame created a welcome haven for displaced southerners. Memorial Church continued to expand through war, a depression, and the onset of vast social changes. Coming to Memorial in 1952, the Rev. Arthur Kelsey felt there should be outreach to the poor, who he wanted to feel welcome in the church. Some parishioners feared this was the gateway to racial integration, and after a period of dissension, Kelsey resigned in 1956.

The next rector, John R. Cooper, was a bridge builder. In 1961, Cooper led the congregation to sponsor the construction of a new high-rise apartment building for the elderly in Bolton Hill. In 1967, Memorial elected its first woman to the vestry, Mrs. Randolph Dame, another milestone.

Due to the social unrest of the 1960s, Memorial saw its congregation dwindle to a handful of members. In response Memorial’s vestry called a “northerner,” the Rev. Lyman “Barney” Farnham as the new rector. Farnham, who saw the overwhelming need for a ministry to the dispossessed and poor in the city, began the church’s transformation from a tradition-bound neighborhood parish to one that is progressive, diverse, and committed to social outreach. Today, Memorial Church has one of the most racially and ethnically diverse congregations in the Diocese of Maryland.

The Rev. Martha Macgill broadened Memorial’s spiritual and social outreach to bring in a new generation of parishioners who continue to expand the church’s commitment to social justice. Memorial is again searching for a new rector, continuing on its spiritual quest for justice and peace through Christ’s love.