When St. Mark’s was founded in 1849, the eight founding vestry members owned a total of 53 slaves; many of the other early members of the church were also slave owners, and the original plans for the building were altered to include a gallery for slaves, which still exists today. It is possible that the church and pews were constructed in part with slave labor; it is certain that they were paid for in part with wealth that came from slavery.

Enslaved people were present at St. Mark’s from the beginning. Three of the first four baptisms recorded, in 1849, were of “colored” children: nine-month-old Martha and three-year-old Charity were the daughters of Elizabeth and Abraham Howard, slaves belonging to two different white families; and one-year-old John was the son of Louisa and John Hawkins. Seven other African-America baptisms are recorded in the parish register before 1865. 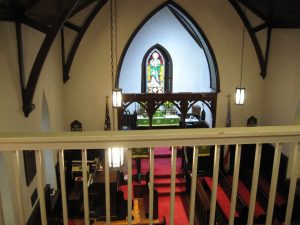 The first two people to be married at St. Mark’s were Jeremiah and Matilda James, slaves of one of the founding families, in 1849 on Christmas Day. Nine years later, Matilda was freed and moved to Hagerstown with two small daughters. After the Civil War she and Jerry reunited and lived in Beaver Creek, Maryland, with four more children.
Another local slave couple who may have married at St. Mark’s were Isaac Warfield and Letty Ann
Hopewell. Later, Isaac overheard that one of their daughters was going to be sold. To avoid this fate, the Warfield family made a successful escape to Pennsylvania, where they remained until the 1870s. Eventually they returned to the neighborhood of St. Mark’s. There, as an elderly man, Isaac was baptized and confirmed at St. Mark’s, several of their grandchildren were baptised by the rector, and Isaac and Letty Ann were buried in the churchyard.